I am very happy to announce v0.3.0 of the padr package, which was introduced in January. As requested by many, you are now able to use intervals of which the unit is different from 1. In earlier version the eight interval values only allowed for a single unit (e.g. year, day, hour). Now you can use any time period that is accepted by seq.Date or seq.POSIXt (e.g. 2 months, 6 hours, 5 minutes) in both thicken and pad. get_interval does test for both the interval and the unit of the interval of the datetime variable from now on.

With this new definition of the interval the possibilities of both thicken and pad are expanded. See the following analysis, where the new functionality is demonstrated by aggregating to daypart: 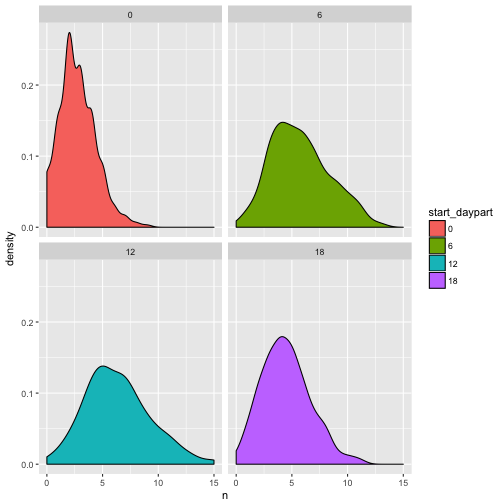 The addition of unit specification to the interval made it unfortunately impossible to make v0.3.0 fully backwords compatible. The two main functions are affected in the the following way.

One should thus be a little more careful that there is no higher unit within the interval that explains the data as well. To reduce the risk of padding at the wrong unit, pad now always prints the interval at which the padding occured.

The second significant change in this version is the reimplementatiion of pad. Performance was poor when pad was applied on more than a handfull of groups. By leveraging dplyr this is now greatly improved.

Besides, functionality is slightly adjusted as well: